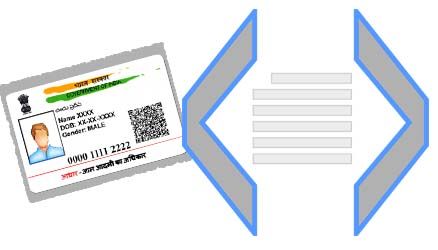 This Aadhaar Paperless Offline e-KYC is as per verdict of the Supreme Court judgment on Aadhaar and it fulfills privacy concerns and limit data sharing.

The main benefit of this Aadhaar Paperless Offline e-KYC tool is that, it limits data sharing by giving the power to Aadhaar holder to customize which all details he or she wants to share.

After the Supreme Court Verdict, UIDAI and Government is focusing on offline tools for verification of Aadhaar of any person which will not require sharing of biometrics and even there will be no involvement of UIDAI Servers during this process of verification.

UIDAI has introduced two methods through which offline Aaadhar Verification could be completed and they are:

Aadhaar Paperless Offline e-KYC includes generating Aadhaar Digitally Signed XML which can be stored on laptop and phone. By simply sharing this created XML file you can get your identification verification done offline.

Aadhaar XML file will contain details of Aadhaar holder like Photo, DOB, Email, Mobile, and Gender. However while generating this file, user has the choice to select which all details he or she wants to share in XML file out of these 5.

You can now share this file wherever, Aadhaar Paperless Local e-KYC is accepted.