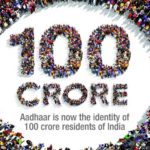 Aadhaar means "support" or "foundation" in other terms. Aadhaar Card is voluntary and any person can apply for Aadhaar. Aadhaar is a 12 digit unique number issued by UIDAI to the resident, but the resident can't have duplicate or multiple Aadhaar numbers. As the Aadhaar is linked with their biometrics data and hence if in future if the resident tries to create or enroll their self to create another Aadhaar Card it will get rejected because already Aadhaar Number has been issued to that … END_OF_DOCUMENT_TOKEN_TO_BE_REPLACED